One weekend, during the height of summer, my friends and I went on a roadtrip to Paihia. This was months before the nationwide lockdown. The days were long, and the nights were still very warm.

It was 9pm. I was sitting in the back of the car, and had just begun winding down from a long week at work. The sky outside was coloured with hues of purple and blue, the landscape had merged into a blur of pine trees, and the kabump of the car tyres on the winding roads fell into a steady rhythm.

It was around this time of the night, that I felt a familiar hum – that tingling feeling I got whenever I passed through a place or a moment that held the beginnings of a story. The hum was telling me to pay attention.

So I shifted my attention away from the window and back to the conversation in the car. My friend was telling us about something called the Simmer Dim. I asked him what it was. He said it was the name given to a day in the year when night never reaches complete darkness.

I recalled having this conversation because despite it being 9pm, it was still bright outside.

Simmer Dim, Simmer Dim, the words hummed in my ear. I pictured a glittering pool of water with animals congregating around it. There was something unusual and mysterious about that word. Like “the witching hour” in Roald Dahl’s book. It all contributed to the air of mystery around a certain time of the night.

That evening, I learnt that night-time had three shades; twilight, night and dark, like the shades of blue in a paint swatch.

It was dark by the time we arrived at our accommodation. I woke from my deep slumber and looked up at the house. A row of solar lights lit up the front porch, throwing hues of greens and blacks against the wall. My friend said something that made us all laugh. “Is this your parent’s house, or is this a hotel?” It was magnificent. Even in the darkness.

We grabbed our bags and clambered up the porch steps, tired but eager to see the house. Barely able to stand upright, we stumbled into the living room and dumped our bags on the floor.

Someone switched on the light and magically, one by one, our tired eyes lit up. In front of us was an island, with a walk-in pantry shelved with food. We drifted from room to room, admiring the paintings, the neatly-folded bedsheets, the warmly-lit bathroom and the dusky scent emanating from a nearby candle.

My sister and I chose to sleep in the bedroom with the cute window wall. It framed the backyard behind the house, like a painting. This wasn’t just any backyard. It was a forest, as dense as any forest here in NZ. You could walk from here all the way to another town. That was how deep it was.

My friend told us that one evening, when he was sitting by the front porch, he sensed that something was staring at him. When he looked up, he saw two eyes staring at him from inside the forest. A boar. He was sure of it. It was also what had eaten the meat his grandmother had left outside.

That evening, I drifted into a peaceful slumber, sinking my head into the soft pillow, a deep smile on my face, knowing that tomorrow was going to be a big day. This is the pleasure I derive from being in nature. This is the magic of nature.

As the summer holiday draws to a close, I refuse to resign myself to the usual dread that fills these last few days.

I have persuaded my friends to go on a spontaneous roadtrip with me in which we are all going to explore and be adventurers again.

Our planning for this one day roadtrip began on New Year’s day, right after 12am, and by 1am, we had decided to meet two days later to drive up North to a “developing” city named Tauranga, a three hour drive from where we reside.

I don’t know whether you know this, but here in New Zealand, developing cities don’t look like your usual slum of the earth.

Instead, picture a sunny harbourside town, where every street name and road sign has the word “ocean” or “coast” in it, and everybody in the neighbourhood looks extremely tan and fit. I wouldn’t be surprised if the whole town was selected to star in the next Baywatch.

Anyway, that’s where we found ourselves in, overdressed and overheated, strolling through a harbourside paradise.

To point out our exact location in paradise, we were in Papamoa, a suburb with a beach that residents actually use! something that rarely happens where I live.

Since I came unprepared to this harbourside town, without togs or a towel, I did not get a chance to bare my skin to the summer sun or dip my body into the ocean. I did have a front row view of the sea and watched longingly ahead at the surfers and swimmers catching their next big wave.

When the excitement seemed too good to miss out on, I rolled up my pants and ran into the crashing waves, not caring that my bottom-half was soaking wet and that I didn’t have a spare change of clothes.

The salt and sand was still on my mind when we left Papamoa. So I insisted we wrap up the evening by watching Indiana Jones late into the wee hours of the morning.

I want to wake up every morning in Papamoa. It reminds me of adventure and beaches, sand and sunshine, of things people should do more of to fill their lives with excitement.

As I wake up in my own bed with the wind howling outside, I ask myself, what can we do to make our lives more adventurous when we have jobs and responsibilities?

I hope to continue searching for an answer to that question as I return back to work next week.

Enid Blyton taught me that summertime is all about exploring, and that if you look closely, even ordinary things can start to look like treasures.

I’ve discovered a workshop hidden right outside my new house. It’s hidden because nobody can see its potential but me. If I were to describe it to you, I’d take away the magic from this place. Instead, I’ll talk about what I plan to fill it with.

Coral. She’ll go in there first. That’s my coral-coloured kayak. It’ll be a proper little home for her. I take her out to go exploring with me during the summer but she hibernates during the winter months. A tarpaulin over the timber shelter will cover her nicely from the harsh sun.

My imagination. It’ll be nice to have a place to store my imagination. These days I daydream from room to room, leaving too much of my energy in bits of places. Virginia Woolf always said that a writer needs a room of one’s own. Mine just happens to be a workshop!

I am happy to have found a small space to occupy and fill with wonderful projects. It’s a way of keeping the magic alive even if I am now an adult. 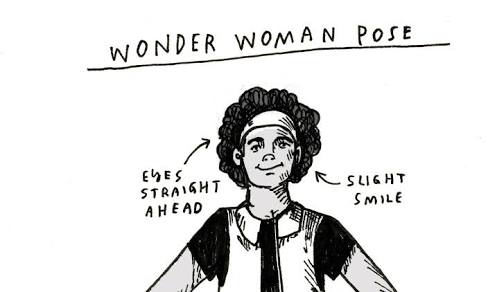 Because I’m young, stupid and naive, I thought it would be a no-brainer to follow in the footsteps of some leading ladies and heroines in this book:

The Gutsy girl: Escapades for your life of Epic Adventure

By saying YES to all the roadtrips I got invited to this Summer, I definitely came out scathed with memories.

Road trip 1: Tongariro Crossing (Or more like the spilling out of guts)

So here’s what happened:

I was supposed to go on an epic 8 hour hike with my group of girls across the Tongariro Crossing but as soon as we arrived at the backpackers motel I had a severe case of the runs which lasted the entire day and night and the morning after. So I was a no show, and ended up lying in bed the whole day.

I did leave my room once to grab a glass of water and ended up being treated to a few hours of humourous conversations with a cast of international backpackers and a wonderful Christmas Eve dinner with roast chicken, ham, potato gravy… everything. And, to top it off, I made 4 new, amazing friends. 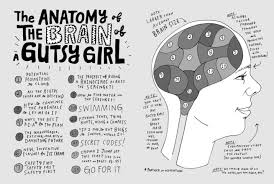 I must have thought that I was Wonder woman because when the waves were crashing down against the rocks, I recklessly abandoned any notion of my mortality and headed further out to sea and well, got stuck in the waves.

It was the loneliest and scariest moment of my life trying to stay afloat while the waves continuously crashed down over my head. All I could think of to the waves was: ‘Stop! give me a break so I can swim to shore.’ But it was just too strong and I felt so small against this big ocean.

My moment of relief came when someone swimming in the ocean saw me and dragged me in to safety.

But just so that I would get over my trauma, I went right back out to the ocean and had some cautious fun splashing about in the shallower areas.

How gutsy was that?

To sum it all up

I had some good gutsy and bad gutsy moments, and moments where everything literally spilled out from my guts. Splendid!

Since summer’s almost over, and I’m trying to squeeze every little bit of fun out of the sunshiny weather, I think it’s time to consult my gutsy girls book to see what’s next on the adventure agenda!